Evolution of a Collage with acrylic and rice paper 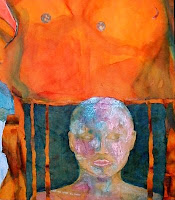 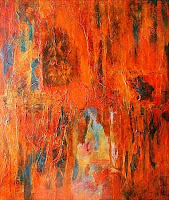 I started this collage last year, in the summer of 2007. It has taken me one year to finish it. That is the longest it has ever taken me to finish a collage. With this particular one, my emotions were still very raw following the death of my Father. I felt disconnected from my world and overpowered by my feelings. Hoping to communicate how I felt, I started this collage. The first image shows the collage in June 2007. The top of the collage was not melding well with the lower half. The words on her shoulder say "make the world go away." I continued to add to the piece. It eventually became a big mess as seen in the right picture. And in August 2007, I stopped working on it.

For a year it hung in my studio. I contemplated throwing it away as I did not want the reminder of the past. At the same time, I felt it was a hurdle I needed to leap. With the advent of my solo exhibition, I decided it was time to finish it. I removed as many layers of the collage as possible. It took about two days as it was a slow and meticulous task. This removal of layers was symbolic for me, resulting in a change of my emotions. Instead of expressing my wish to escape, I wanted to remember. The poppy has four petals: each petal symbolising a member in my family. Throughout history, scarlet poppies have been associated with death and remembrance. So the red petal is in remembrance of my Dad. The metallic paint was too shiny, so I toned it down before varnishing. The final collage was completed in August 2008 and is titled, Presence II: Remembrance. 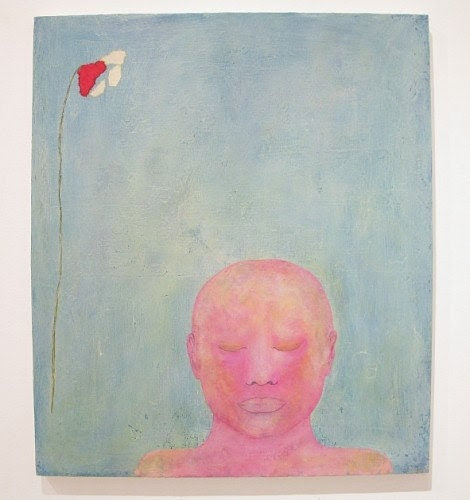 Chris Stone said…
What a beautiful remembrance and wonderful piece. Its very affecting. Thank you for sharing!

Amanda said…
It's a very beautiful piece. I am sorry about your loss, but I think you're right. This is something you needed to do, and now you'll always have this beautiful work as remembrance.
8/10/2008

High Desert Diva said…
I'm glad you took pictures along the way to document the transformation of both your art and your emotions.
8/12/2008

LazyTcrochet said…
It is beautiful. What a transition. Thanks for sharing. Now I truly understand it!
8/12/2008

GalleryJuana said…
Thanks for coming by, everyone.
I am glad I had pics to document the process too!
8/12/2008

Julie said…
Thank you so much for sharing your process and all the emotions that surrounded it. It's a lovely piece.
8/12/2008

Rosebud Collection said…
What a beautiful outcome..lovely picture..The first shows your hurt with your loss..and now how you have handled it..Wonderful..
8/12/2008

gentryart said…
Your story and artwork really moved me, thank you! Congratulations on taking this big step to move forward with your grief. Just take it one step at a time.
8/13/2008

GalleryJuana said…
Julie, rosebud and gentry, thank you for your lovely comments. I am amazed at how strongly my emotions shaped this collage.
8/13/2008

Joy Logan said…
When my mom died I went thru alot of loss and emotion too. I found art helpful. But the mourning takes a long time.
8/17/2008

Artists With Artitude said…
Juana!!! This collage is GORGEOUS!! I just got back from my overseas trip and was absolutelt delighted to catch up on your news. What a lovely surprise! Keep going!!!! You've got it, girl!
8/21/2008

April 16, 2012
fake journal 2012 I love blog hopping which is how I found Roz's IFJM blog.  For the month of April, participants keep a fake journal that is outside of their regular visual journal . My mind started leaping with ideas. In the next few weeks, you'll see posts titled "Fake Journal" on my blog. I dug up this old journal that I had refused to throw away 'cuz I knew some day it would have a purpose. For the cover, I collaged one of my failed paintings and wrote a short message. I've been carting it around with me since 2008, from Japan to Mexico to California and now Washington. fake journal page one Journal : 8.25 x 5.5 notebook with kraft paper pages and blue ballpoint pen Letters to Antigone Cover : 4 x 6 140# watercolor paper, line drawing with black micron pen, monoprint tissue paper collaged onto drawing with pieces ripped off.
4 comments
Read more