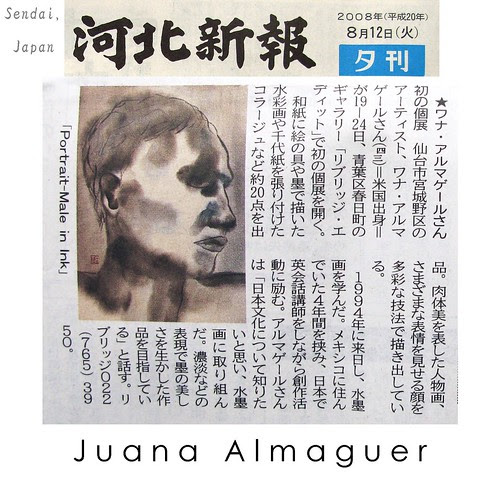 Solo Exibition: Tuesday, August 19, 2008 through Sunday, August 24 at Re-bridge Edit Gallery in Sendai city.
Last Monday, August 4th, I had the chance to interview with a reporter from Sendai's local newspaper, Kahoku Shinpo. He was very kind and patient with my Japanese and adept at eloquently paraphrasing everything I said. The above pic shows the article spliced with the front page title. The small article appeared in the 12th of August evening edition which covers entertainment and lifestyles in Sendai. The article talked about my up-coming solo exhibition, my study of sumi ink and watercolor painting on rice paper, living in Mexico, and working as an ESL teacher in Japan.

I am really happy that the newspaper published this piece. In early July, I had hand-delivered an envelope with my press release, moo card and a 2.5 x 3.5 print inside. On the front of the envelope, I had pasted the solo exhibition postcard. I had a name of a reporter but expected to just drop off the envelope at the Newspaper's reception. The receptionist asked me to wait while she called the reporter. The assistant came down and took my envelope while I gave an excited, brief explanation of who I was and what was in the envelope. For weeks, I wondered if anything would come of it, when on July 31st I got the call.

For information on how to write a press release, I visited PublicityInsider.com. Once I got passed the annoying pop-up advertisement, I could see that the page was very informative.

I recently discovered Sigur Ross. I love the singer's ethereal voice and the mesmerising sounds of this group. The album I love is Takk.

Rosebud Collection said…
So happy for you..It looks like a nice article and has to make you feel really proud..Congratulations..
8/16/2008

Chris Stone said…
Congrats on the article! and i'll check out that album. he sounds interesting.
8/16/2008

Artists With Artitude said…
CONGRATS! You deserve all the right recognition, my dear. I love the displayed newspaper too. Can we get a copy?? It looks like a piece of art!
8/21/2008

April 16, 2012
fake journal 2012 I love blog hopping which is how I found Roz's IFJM blog.  For the month of April, participants keep a fake journal that is outside of their regular visual journal . My mind started leaping with ideas. In the next few weeks, you'll see posts titled "Fake Journal" on my blog. I dug up this old journal that I had refused to throw away 'cuz I knew some day it would have a purpose. For the cover, I collaged one of my failed paintings and wrote a short message. I've been carting it around with me since 2008, from Japan to Mexico to California and now Washington. fake journal page one Journal : 8.25 x 5.5 notebook with kraft paper pages and blue ballpoint pen Letters to Antigone Cover : 4 x 6 140# watercolor paper, line drawing with black micron pen, monoprint tissue paper collaged onto drawing with pieces ripped off.
4 comments
Read more