July 02, 2011
I think this was the favorite part of the trip for my husband:  The San Francisco Maritime National Park.  The collection of historical ships are docked permanently just north of the popular Fisherman's wharf.

The tugboat was not open for tour but here's my shot of it sporting it's shadow and Alcatraz in the background. 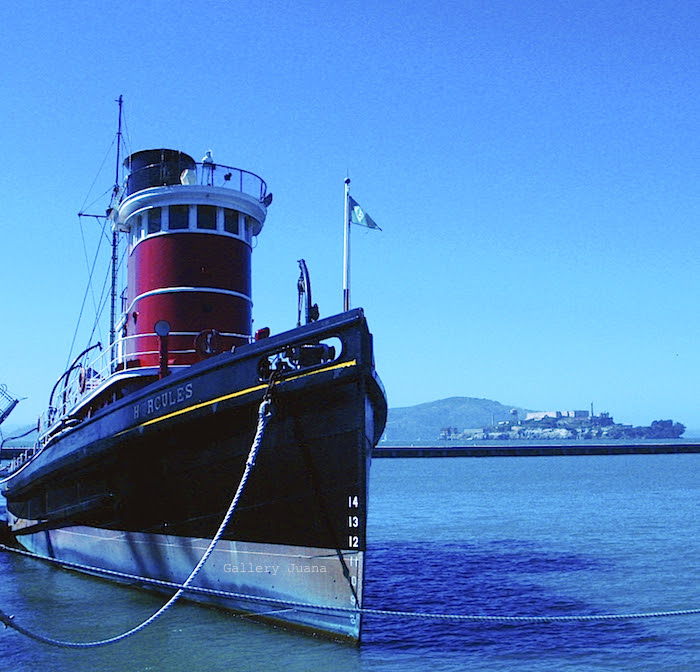 We actually boarded the huge sailing ship named Balclutha.  The Balclutha is a three-masted, steel-hulled ship and was launched in 1886.  It took a crew of about 26 men to handle the ship at sea with her complex rigging and 25 sails.  For three years, beginning in 1899, she hauled lumber from the U.S. west coast to Australia.  Most of her career was spent hauling Salmon from Alaska to S.F.

I couldn't get a good photo of this massive sailboat, but  Jassy-50 on flickr took a good one which you see below.


I hope everyone is enjoying their weekend.
Hop on over to HeyHarriet's blog for more weekend shadows.

Ralph said…
A tug boat seems diminutive and insignificant. Yet the small tug steers the much bigger ships into port. The shadow is massive, so we see the tug as a small but mighty craft!

The sailing ship seems from a world long ago. Yet is offers a stately elegance, built when ships ran with the wind. However, engines, radar and GPS of the modern ship are prepared for sailing the seas today.So the past is better left at the park...

Ms. Becky said…
so that's what Alcatraz looks like today, aye? love the tugboat image - lots of blue blue blue. is that a person up there, gazing out at the water? happy SSS.
7/02/2011

Sylvia K said…
Wonderful captures for the day and I love the watery shadows and the boats! Hope you have a great weekend. Happy 4th of July!

Catherine said…
I love that first shot - such lovely tones of gorgeous blues...mine this week is also in SF!
7/02/2011

LakewoodDP said…
What a neat shot of the tugboat and its shadow with Alcatraz in the background!
7/03/2011

Spadoman said…
I've been to this place many times. I love to visit San Francisco. Great shot of the tug. I love the shadow playing in the water. The three masted ship is awesome as all large sailing vessels of that vintage are.
Great stuiff.

visiting the Victorian Radicals exhibition at the Seattle Art Museum

June 30, 2019
Last Friday, we took a day trip to Seattle.  The main focus of the trip for me was to tour the Victorian Radicals exhibition at the Seattle Art Museum. As usual, we got to Seattle on public transportation: bus, ferry, and train We started off the day with a cup of coffee at a cafe on the 40th floor. From there, I headed over to the Seattle Art Museum for the Victorian Radicals exhibition. I really enjoyed this show.   I took photos of some of my favorites: La Donna della Finestra, 1881 by Dante Gabriel Rossetti Rossetti produced three variations on this composition. The one above, the Birmingham version, was begun the year before he died and thus left incomplete. Musica by Kate Elizabeth Bunce ca. 1895-97, oil on canvas Musica by Kate Elizabeth Bunce ca. 1895-97, oil on canvas quoted from the exhibition card: “Kate Elizabeth Bunce was an English painter and poet associated with the Arts and Crafts movement in Birmingham. “ Proserpine, 1
Post a Comment
Read more